End of 3rd month: It has been a light week leading into the Isokinetic Strength Test. Knee is feeling decent. I need my  quadriceps and hamstrings in both legs to be similar in strength or up to a 20% difference in order for me to starting straight line running.

How does it work?

See below for an explanation from http://www.isokinetic.com

Strength and muscular endurance can be measured extremely accurately through the use of an isokinetic machine, the data from these tests can then be used to help us to plan a patient’s rehabilitation activities.

These devices are particularly effective at measuring the strength of muscles that govern the movements of joints (shoulder, knee and ankle) following an injury.

The test is always performed by comparing the results from two limbs, this allows us to quantify the deficit as a percentage of original strength, giving us a more clear goal to reach.

Control tests are scheduled to measure the progress towards 100% recovery, which is considered a prerequisite to returning to sport. Ensuring muscles have had their original strength and tone restored is also a crucial component of re-injury prevention.

Getting my tests done at MHIP (Manchester Institute of Health and Performance) where they have all the latest performance and recovery devices. They put you on a machine to test the strength of your quads and hamstrings. This produces a data sheet which tells you how much force you’re putting into the test. The results didn’t turn out the way they should have. There is a 50% difference in my hamstrings. If I was to train at that strength, I would be highly likely to re injure it again. So the plan of me doing some running on Alter G is now gone and it’s back to some more grafting on the watt bike. Death by watt bike is exactly what it is.

We are doing a little ground work conditioning. Sessions consist of working 5 by 5 meter areas in 3 different sections next to each other.

Section 1 would be getting off the line for 5m, dropping chest down on the pad with a roll to either side (x 2).

Section 2 was the same as the first one but when dropping, you make a tackle on each shoulder on the pad.

Section 3 was get off the line to run 5m to make a tackle on the bag, then get up to contest for a ball (x 2).

Do that repeatedly four times and then rest for 1min 30secs.

It may not sound like much but I can tell you it is, if you haven’t done any rugby specific drills for four and a half months!

Next time round it was a little easier but still makes the legs heavy.

Did my first straight line running session and felt really good and happy about my progress. Session was:

It’s the first time ever I’ve been told slowdown in my running, that’s how happy I was to be running again.

End of the month didn’t end to well. I caught the infamous man flu which took me out for a week. Felt I’ve lost a bit of momentum because I couldn’t do anything that week.

Had my first speed sessions with a speed coach Keith Harding from Sale harriers.  We did speed drills to get the running techniques back in sync. Then with my physio James we started doing change of direction running getting ready to train with the lads in the Worcester week build up. Everything is going well and I train with the lads for the afternoon session, Felt good.  I felt I was all good skill and knowledge wise but just uncoordinated with my running and not confident to step off my right as it was my dominant side before the injury. I stayed away from the contact as I didn’t do much leading into my first session. After training I rip into a few tackles on the pads just to get the feeling back and it was satisfying being able to do this all again. It wasn’t the best but I know I’ll get it back, once I get a few sessions back under my belt.

Well, you can call this a month of mixed emotions, where I had a lot of blips. Probably the most frustrating time of the recovery for me. My achilles were giving me problems just when I had started getting amongst it again. I ended up doing another isokinetic test where I needed the deficit in my knee to be 15% or less to start training full time with the lads. So, in the lead up to the test, I did the same as the end of the 3rd month where I worked hard to strengthen the muscles around my quads and hamstrings. I was a bit limited when it came to the leg extension as the patella in my knee was sore when I did them, but was told the pain was my subconscious mind telling me this so I kept pushing through it.

I was lifting more weights by the week, but didn’t feel like it was getting stronger. Come D day (test number 2), I was confident that I would get the score I needed to get me back into full training. Testing is done and the scores are in… Its 29% deficit. This meant I wasn’t ready to play anytime soon and if I did I had a high chance or re-injuring myself. My Head was gone. The frustration started to creep in my mind, trying to figure out where I went wrong.

Left in the place in a foul mood not wanting talk to anyone. I went home and calmed down when I saw my kids and have a talk with my wife. In a week and a half, my mate was getting married in Bali so I couldn’t wait to go away for the weekend to clear my mind.

To be honest it was the trip I needed. I hadn’t seen my mate for 7 years and haven’t caught with the other brothers for maybe more. We had a few beers on the beachside while we reminisce about the old days. The wedding was a beautiful day. It was a good reset for me. 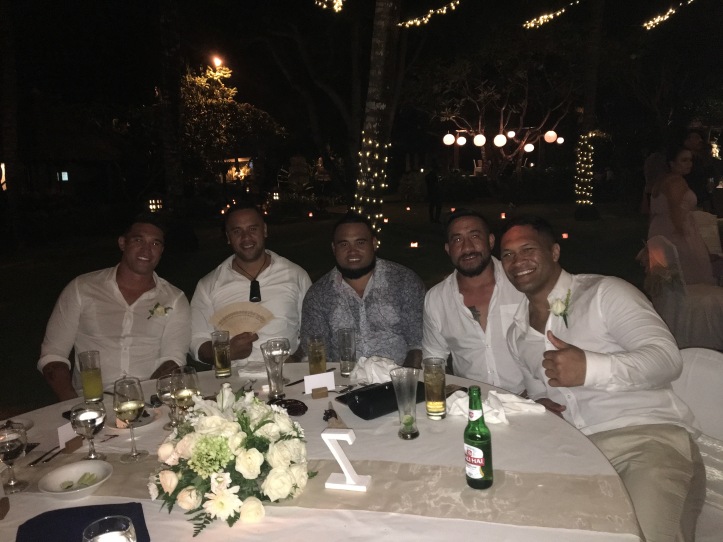 I was back in training on the Monday, my mind was clear and I was ready to give it another crack. We were gonna push for the Newcastle game Friday night but it was on a 3g pitch which could cause more harm than good. So we planned for the Monday after, for the Jets (Sale Sharks 2nd XV) game.

The night before a game I am usually quite relaxed but tonight I feel a little anxiety as I’m not 100% sure I am ready to play again. I haven’t done much full on contact and I haven’t been tackled or made a proper body on body tackle since I played before my injury. So I guess that’s the reason behind me feeling a little edgy. The build up to this game wasn’t what I wanted, but like life, sometimes you just need to go for it. With failing the test 2 weeks before makes it risk reward situation. No guts no glory. I’m pretty sure come game time I’ll be sweet as, I will be playing at blindside flanker, which I haven’t done since I was 12. The reason behind me playing there is so I can just focus on getting my hands on the ball for carries and be in the middle for defence so I can get through some tackling.

You could say this game for me will probably be one of the most important games in my career, even though it is a 2nd team match. This game will give me some indication if I am ready or not, it will help decide if I am going to be able to continue playing and contract wise, it’s crucial. I have had interest from French clubs, but no one will make an offer until I play again. Sale have given me an option, but not one where I can support my family. If I was a single man, I would easily have taken it, but I have to provide for my family. So this game means a lot to me. I need to prove my worth and show that this injury is just a blip in my journey of rugby.

Game day. I have accepted my nerves and ready to roll with them. Nice to have the game day feeling again. Been a long time in-between tackles. I am overwhelmed by the messages of good luck for my first game back. My wife and kids will be there, plus the old man who read into my future by saying he knew I would become a flanker and then followed it up by saying,“You better play good mate or you will lose your contract” as if I needed more motivation than that!

For some reason Island parents always mock you before the game to make you prove them wrong. Crazy but it seems to always work. Guess that’s why we islanders mock others, not out of disrespect, but to get a reaction.

I go through the usual game routine of getting my gear ready, although I forgot where I last had my mouth guard? It’s been that long. Thinking about what boots I’ll wear today. I want to wear my moulds but if it rains I’m done in the scrum. I will get my knee heavily strapped for the first game. For reinforcement, I’ve watched through some old clips to get the brain functioning and visualise what I use to do. Getting my mindset right before I play. Nerves are now becoming excitement.

As I head to the field I feel it all coming back to me. The warm up was a bit different as I had to go with the forwards. After a few hits on the tackle pads I knew I was ready. I really wanted to test my knee out, so the first hit up I had I threw myself into it just to get rid of the worries in the back of my mind. Next one I got put in a gap for a break and my knee hit the ground quite hard but it was sweet. Now that’s out of my head. I can go through the game without thinking about my knee. If there was any damage done on the field it was to my lungs… poor things didn’t see it coming. Got through 40mins and was happy with how it went. A win and a cheeky meat pie was the icing on the cake. I feel so relieved to make it through and feel like I have a slight hobble in my run but in time it should go. Headed to the Little B pub to enjoy a cold cider to finish the night and reflect on the game with a few of the boys and my dad. 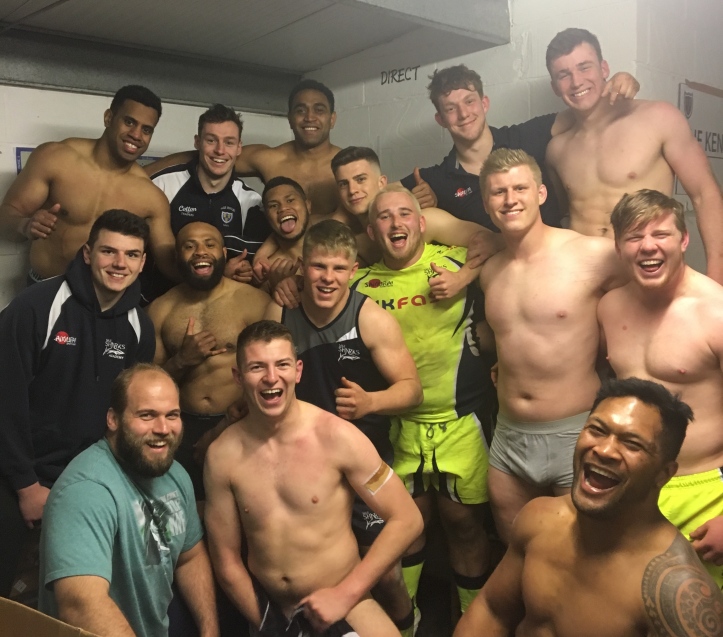 Next day the body isn’t feeling too bad with exception of my achilles which were starting to flare up. I did most of the week’s training which was a good to test for the knee and the achilles. The knee still doesn’t feel like it is 100% which it wont for a year post surgery so they say. I struggle to slow down and change direction off my operated knee side. I’ve been looking up ways via Instagram and google of how to get rid of the pain around my patella. I have put it down to patella tendentious stopping me from powering out into my stride.

Finished the week off well and got through it all. Lungs got another seeing to but overall happy with the graft that went on during the week. Hopefully I’ve put myself in a position to play next.

‘Every now and then we have setbacks. It doesn’t get easier, you just get stronger.’